God’s grace in our waiting

Our son has a book called Waiting is Not Easy!  In this short story, Gerald the elephant learns an important lesson.  His friend Piggie promises a surprise, but Gerald must wait.  And wait.  And wait.  Waiting is not easy.  But, waiting is good when the thing you’re waiting for is worth it.  And, there are many good things that only come through waiting.

I (Jamison) began intentionally pursuing vocational, cross-cultural ministry in 2006.  That means I’m coming up on a decade of waiting (over one-third of my life).  I have often grown impatient and asked God in frustration, “Why is this taking so long?”  As we’ve gotten closer to going to Japan, I’ve been asking the same question in a more reflective, less demanding way.  I really want to know–What has the Lord been up to in the midst of our waiting?

He does not always provide definitive answers to “Why?” questions.  Some things will become clear eventually, but we may never know all the things God has done during this season of waiting.  Yet, I think the Lord has graciously opened the door a crack, so that I can at least peek in and catch a glimpse of  what he’s done for us over the past decade.

Walking with a limp.  One of my favorite men, Sinclair Ferguson, preached a series on the life of Jacob in the book of Genesis.  Jacob was a proud and deceitful man.  After 14 years of hard labor in a foreign land, he returned home.  On his journey, he wrestled with the Lord and prevailed.  But, the encounter permanently changed him, “The sun rose upon him as he passed Penuel, limping because of his hip” (Genesis 32:31).  Jacob’s proud swagger was replaced with a limp.  But, notice the sun was shining on him as he went.  Happy is the limp upon which the Lord’s favor shines.  Happy is the jar of clay that best displays the power of God (2 Cor. 4:7).  And–I hope–happy is the man who, through many years of waiting, enters ministry in total dependence on Jesus Christ. 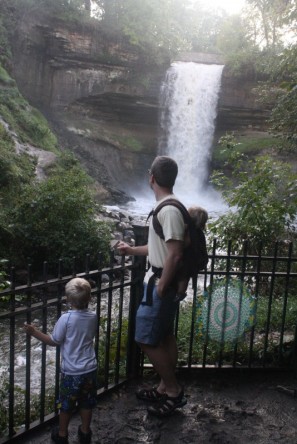 Ten years ago, I really thought I had something to offer–I thought that I would succeed at whatever I did, because I was The Man.  Yikes.  Thankfully, the Lord has given me years of realizing my own ineptitude and helplessness.  Apart from him, I can do nothing (John 15:5).  That was not a fun lesson to learn.  But, there is incredible freedom and hope in coming to know it–the Lord delights to use human weakness as a setting for his divine power.

A boat with ballast.  I think the idea of moving to a different country excites many, especially in my generation.  Pick up everything and live a completely different life–sounds kinda exciting, doesn’t it?  Retrospectively, part of my initial draw toward cross-cultural ministry came from the excitement of doing something new, fun, different, etc.  It’s an adventure!  But, adrenaline can’t sustain you for ten years (or longer), especially when you get married, have kids and start getting gray hair–it started on my beard and is now working its way up.

While I’m still excited about the adventure of missions, I’m no longer driven by it.  Adrenaline has been surpassed by conviction.  Our former pastor John Piper has a helpful illustration.  If the work of missions is a ship, the desire for God’s glory is the ballast that keeps it from flipping over in the midst of strong winds and tall waves.  A conviction that God is worthy of honor among all the peoples is a weight that gives your boat stability to press on through storms.  The only reason we’re still pursuing missions is the belief that Jesus Christ is worthy of all glory, honor, praise and adoration.  And, he is mostly unknown and un-worshipped in places like Japan.

People really matter.  Over the past several years, we have had the pleasure of meeting and growing with many precious Brothers and Sisters in Christ, many of whom are sending us, supporting us, working alongside of us.  Had we gone to Japan or somewhere else earlier, we would have never met many people we now know and love dearly.  That’s not a small thing.  We really thank God for the extra time spent with you all, and we feel supported and strengthened in ways that would have been impossible years ago.  Time with Family has been especially precious, as we’ve raised our children together.

Similarly, had God opened the door for us to go earlier, I think I would have placed more emphasis on developing programs or “ministries,” rather than focusing on people.  This time has helped us increasingly see how much people really matter.  Programs only exist to serve people.  There is something powerful about simply knowing and loving other humans.  Though they are messy, broken and frustrating at times, they are also wonderful creatures–bestowed with greater dignity and worth than anything else in creation.  What an awesome thing to have relationships with people who image God and who will live forever!  And, what an even greater thing that God became one of us, that we can have relationships not only with one another, but with the One who made us!  The desire to see that come about in Japan has grown with my gray hair.

The LORD is good to those who wait for him (Lamentations 3:25).

2 thoughts on “God’s grace in our waiting”